Our short but sweet visit to Oman was brought on by the desire not to
have a long layover on the way to Nepal. We decided that it was better to stay three days near the beach in Muscat instead of spending a few hours in the airport. Boy were we surprised by Oman! It was clean, friendly, a bit westernized, and had beautiful landscapes. Our highlight was hiking and swimming in the Wadi Shab. Read on to hear about our Omani adventures!

We had a rocky start when we arrived. We were late (midnight), our car rental took a while to get (highly recommend a car if you want to do anything cool in Oman), AND THEN we got pulled over for accidentally going the wrong way on a one way when a police car just happened to be present, the cop was rude and told us to get an international drivers license at the embassy in the morning (which is not required) but let us go and then we finally arrived late to our Airbnb so we had to wake up our host. We were so thankful to go to sleep in our comfortable Airbnb room that night so we could put the day behind us.

Our first day we explored the city is Muscat. After a slow start to the morning we headed to The Sultan Qaboos Grand Mosque that lived up to its name. Upon entering I had a hard time being told how to dress to enter even though I was fully clothed in a long sleeve and pants they made my purchase a head scarf. I was uncomfortable in the 90 degree heat, but understand that modesty is part of the Muslim religion. I felt bad for the women that have to cover up everything in the heat, but understand that most of the time it’s their choice.
Once inside the mosque, however, it was quite magnificent. The chandelier, architecture, rug (second largest handmade Persian rug in world) and overall size was very impressive. However, like some of the Catholic Churches we’ve visited, it seems quite extravagant and we wondered about all the money coming in to pay for the mosque. 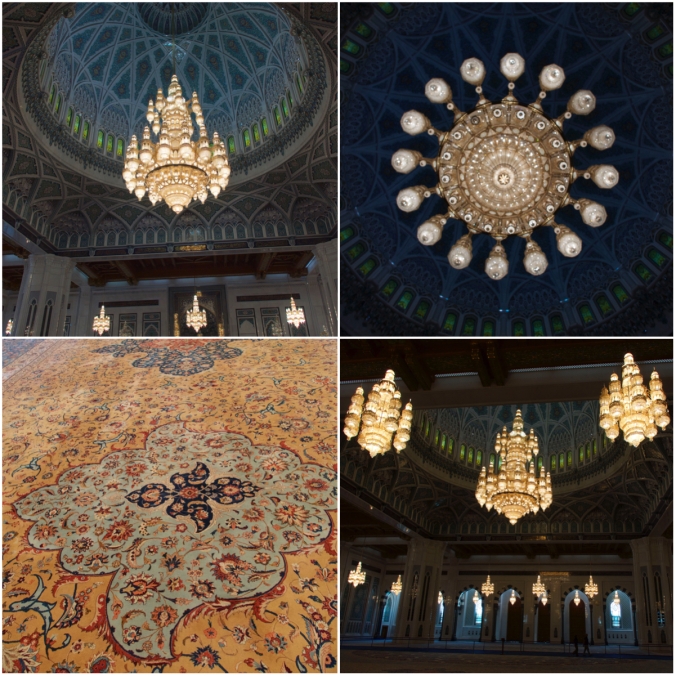 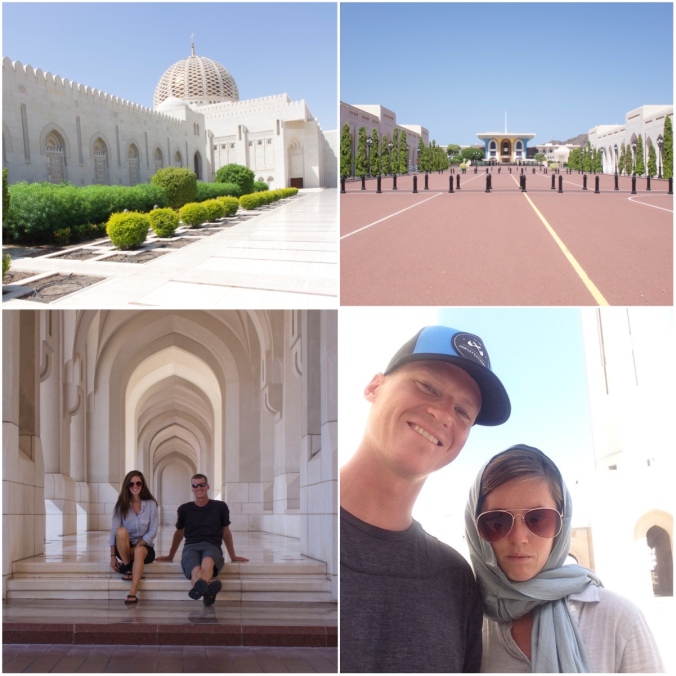 Post mosque we tried (and failed – missed turns on the road) to go to the grocery store and ended up on the corniche and got a quick club veggie sandwich and a large juice to share. We then tried to walk to the Muscat tower, didn’t work but we think we saw the stairs on our drive back… The heat was starting to pick up so we made our stops quicker. Next up was the Muscat palace, but along the way we hiked up some stairs to a lookout along the shore. The water was so blue and made us want to go swimming (more on that later).

The palace was beautiful although one could only tour the outside. The architecture and gardens were very nice. Our last stop was the Muttrah Souq (street market). We wandered through the market and managed to get lost for a while. The craft goods and household items seemed to be for tourists and locals which was good to see. We walked out empty handed because of the high prices. $1 is 2.60 Omani reals.

On our way back to our Airbnb we stopped at the grocery store which was huge, pristinely organized and empty… I guess no one shops during the day. We picked up a few items for dinner and breakfast, but couldn’t afford much. After, we made a stop at Second Cup, which is a Canadian coffee company, for some iced coffee. Tasted great!
Back at the Airbnb we decided to venture next door to the brand new Grand Hyatt hotel that boasted a huge pool. We decided to take a short swim and signed in as guests Jeff and Veronica :). The water felt great in the evening heat. And lounging by the pool is just what we wanted. After swimming we walked to the beach for sunset; looking for sea treasures as we walked. The sandy beach was the place to be. Lots
of people hanging out, playing soccer, jogging, walking, swimming and just dipping toes in the water. Great to see all the activity!

Exploring the coast of Oman

The second day we ventured outside of Muscat to go see a few natural sites. Our first stop was an amazing sink hole what we swam in. It is one of the largest sinkholes in the world by volume: 90,000,000 m3 (3.2×109 cu ft). We weren’t sure what to expect but when we walked up to the ledge of the hole we were so surprised to see bright turquoise water that a few people were swimming in. We were only going to view it but considering it was 90+ degrees, we had to go in and swim for ourselves. We took a quick dip and several pictures of the cool sight. 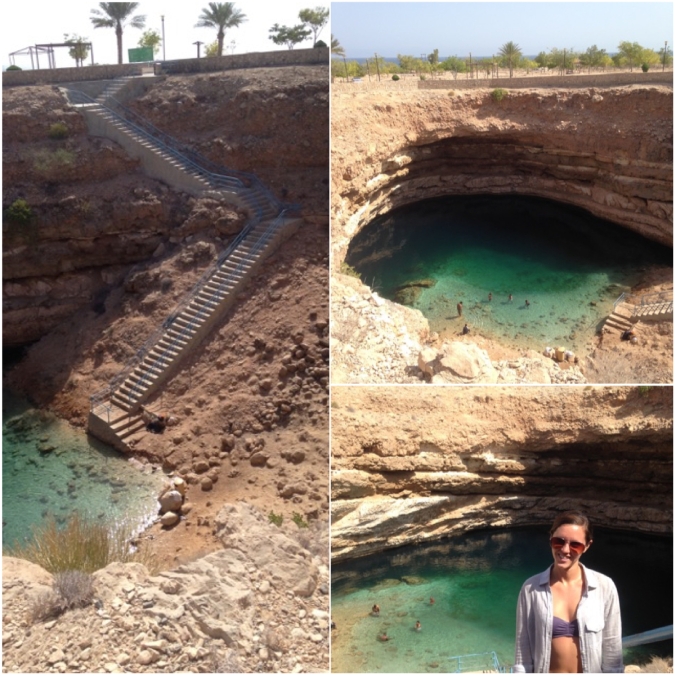 Next was our highlight destination… The famous Wadi Shab. It has a set of amazing natural pools & waterfalls in the midst of the desert, and all of that with a crazy turquoise water color. We parked and caught a boat ride across the river to the trail head. We walked along the riverside and up the cliff side in the blistering heat for about an hour. A big thanks to two previous bloggers who helped us have the confidence that we could do this by ourselves. Check out their posts for more info on how and where to go for this awesome adventure: Fleeting Footprint & Oman Tripper 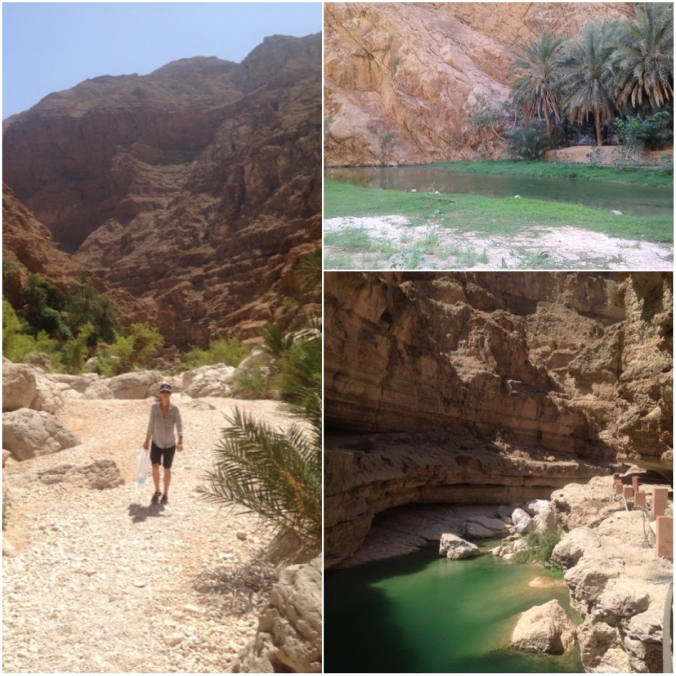 We finally reached a point where the trail was no longer and swimming was the only option. Yay! We quickly left our towel and clothes and took our phone (in a mini dry bag) with us. We swam one pool, then walked to the next, then swam through a keyhole in the rocks (awesome) and arrived at a few waterfalls. We climbed up the falls through a large hole where the water was flowing to a  pool. We were the only ones that far up and it was so nice having our private pool for a bit. After swimming we went back and waded a bit before facing the heat again on our walk back. It turned out to be shady on the walk which made a big difference. 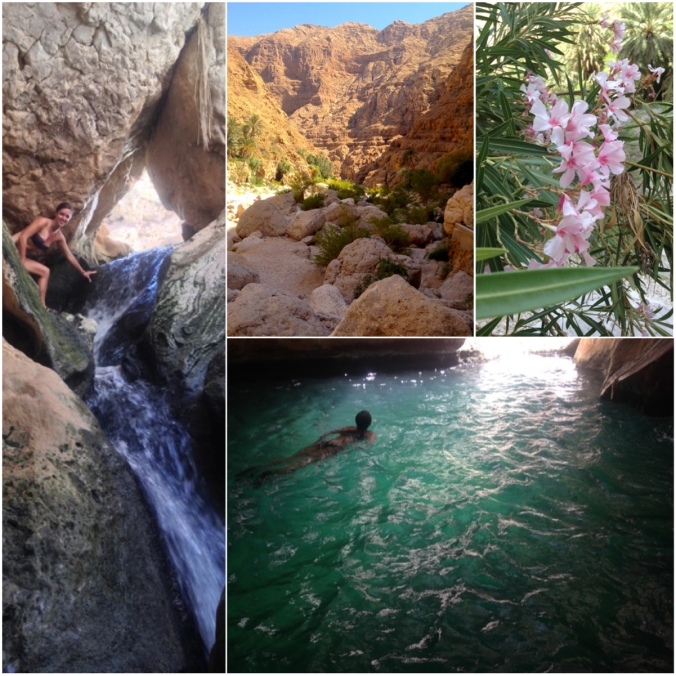 We were all smiles driving back to town because we’ve never been somewhere so unique. A must if you visit Oman! And, in case you needed more reason to go, it’s where the Red Bull Cliff Diving competition was held a few years ago! Check it out here and here.

We returned and decided it was a total swimming day (sinkhole and wadi completed) so we ran to the beach and jumped in the sea. We swam around for a while enjoying the water and observing the busy beach. That night we went to dinner at a great Turkish restaurant. We got a wide spread including hummus, naan and chicken. We have missed eating at the local Lebanese restaurants back home so we’re very stuffed by the end of the meal. Our best meal in a while!

The next it was time to leave so we went for a quick jog along the beach front and headed out to Nepal. Oman was well worth the quick visit and we would love to go back. So much adventure and a very comfortable country for “westerners” to visit.

Up next you’ll hear about our amazing experience in Nepal and our 8 day trek in the Himalaya Mountains.

Fun facts about Oman: The population is only 3 million. Its wealth comes primarily from oil exports. Oman is an absolute monarchy. The Sultan Qaboos bin Said al Said has been the hereditary leader of the country since 1970.